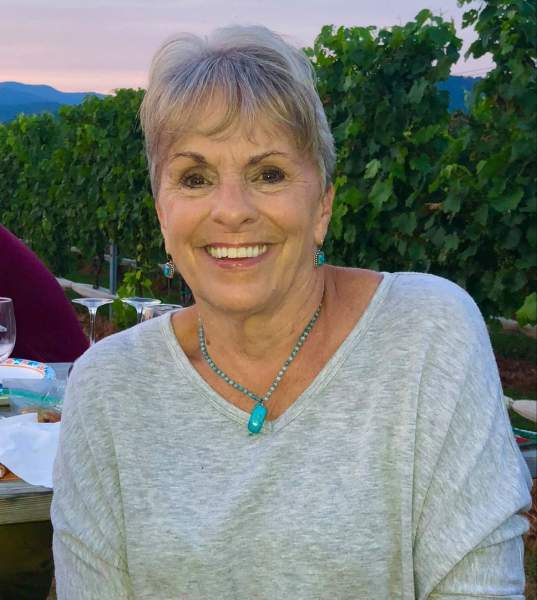 Born in Washington DC, she was the daughter and only child of John Calendar McRae and Florence Elizabeth Lightbown McRae. She graduated from George Mason High School, Falls Church, Va and attended Elon College in North Carolina before marrying her high school sweetheart, Thomas Charles McGarry. Tom and Emmy followed their dreams of purchasing land in Shipman, VA in 1968, and raising their 5 children on Red Apple Orchard Farm before Tom’s untimely death in 1979.

Emmy worked for Ralph E. Turpin Law in Lovingston, VA for 40+ years. It was through the law office that she met her second husband, Stanley Martin Olah, with whom she enjoyed almost 41 years of marriage. Affectionately known as Nanny & Papa, Emmy and Stan spent their time in the company of family, including 18 grandchildren and 4 great-grandchildren. Many days were spent supporting the athletic and extracurricular activities of their children and grandchildren. Summer beach trips were a favorite for Emmy.

Retirement years with Stan were spent traveling across the United States as avid RVers. They always returned home with stories of their adventures and new friendships discovered along the way. As much as Emmy loved traveling, Red Apple Orchard Farm was her heaven on earth. Time at home was always spent outside. Emmy enjoyed gardening, fishing at the pond, outdoor cooking, UTV rides throughout the farm and a good campfire/bonfire. Her best days started with Stan’s fireside breakfast in their outdoor pavilion. While she enjoyed visiting her children’s homes she was most comfortable in her own kitchen hosting the large family gatherings (until the large gathering was actually in her kitchen)!!

Emmy loved her life. She wanted the best for everyone; always positive, supportive and accepting. She was a wonderful role model for her family. She always had time for conversation, lunch dates with her girlfriends, and spontaneous outings with family. Emmy never met a stranger. Friends of the children and grandchildren quickly became a friend of hers. Her home was always open, inviting and full of laughter. She loved music and dancing; especially flat-footing and group line dances with her grandchildren. Not to mention Virginia Tech tailgates!

Emmy’s love of Nelson County resonated with her children. Throughout her life, she was blessed to be surrounded by them as they all returned “home” to raise their own families.
Emmy’s faith was strong as she was a devoted member of Saint Mary’s Catholic Church, Lovingston, VA. She was an original member of the Catholic Parish at Oak Ridge Chapel.

She will be remembered fondly by many including numerous in-laws, cousins, nieces and nephews among the McRae, McGarry and Olah families.

The funeral mass will be held on Saturday, November 20, 2021 at 11:30 am, St Mary’s Catholic Church, 9900 Thomas Nelson Hwy, Lovingston, VA. A live stream of the mass will be available on their website. The family welcomes you to celebrate Emmy’s life with them at the family farm after the service, 64 Red Apple Orchard Lane, Shipman, VA.

The reception will be outside with food, drink, and a heated tent space. Comfortable attire is suggested.

In lieu of flowers, the family requests memorial donations be made to St Mary’s Catholic Church in her memory.

Arrangements are under the direction of Wells/Sheffield Funeral Chapel of Lovingston (434-263-4097).

To order memorial trees or send flowers to the family in memory of Emmagene McRae McGarry Olah, please visit our flower store.