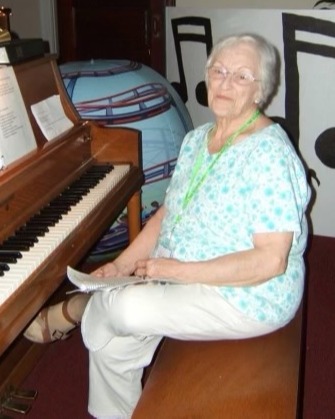 She was born May 5, 1937 to the late Russell Faulconer Smith and Hilda Alice Witt Smith.

In addition to her parents she was preceded in death by her daughter, Deborah Ashley,  her son , Ronald Ashley, and daughter -in-law, Karen Abshire

Hilda was born and raised in Nelson County. Her family were the original owners of Ashley's Market on Route 151. She attended Mary Baldwin College. She worked for State Farm, Nelson County School System, where she worked as a librarian assistant and in the guidance office and ended her work career at Wintergreen beginning in October 1977 and retiring in October 2014.

Her hobbies included raising her four children and playing the piano for Rockfish Valley Baptist Church. Her two sons, Billy and Tommy were her primary caregivers.

A funeral service will be conducted at 11:00 a.m. on Wednesday,  January 18, 2023 at Rockfish Valley Baptist Church with Pastor Justin Braun officiating.  Interment will follow in the church cemetery.

To order memorial trees or send flowers to the family in memory of Hilda Mae Smith Ashley, please visit our flower store.