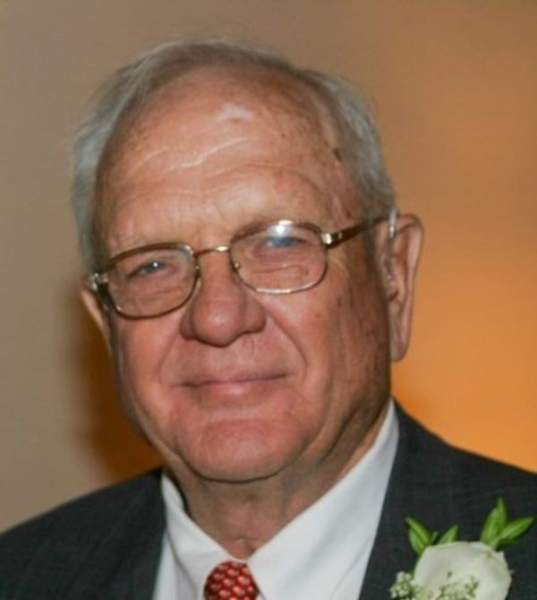 On Friday, March 11, 2022, Paul Massie Saunders, Sr. passed in the midst of a large family gathering.  Listening to string music and songs, he was swept away.  He is survived by his devoted wife of over 65 years, Tatum Newbill Saunders.

Born November 8, 1933 to Mildred Massie Saunders and Samuel Edmund Saunders, Paul lived most of his life at “Tye Brook”, his family home in Nelson County.

In 1947, Mr. O. O. Atto, an eighth-grade science teacher, taught Paul how to propagate boxwood.  Paul was fascinated at the process and through the enthusiasm of his mother and his county agent, Paul started a backyard nursery.

In the summer of 1955, Paul, then an Agricultural Farm Agent, met Tatum, a UVA nursing school graduate, at a 4-H event near her home in Franklin County, VA.  They were married August 18, 1956.

Paul loved the farm but found it difficult to support his growing family that soon included seven sons.  To provide steady cash flow, he continued his family’s tradition as a land surveyor.  However, he hated property line disputes that required him to be in court.  In 1981, after surveying some 3,000 tracts over  20 years, a copperhead snake bit him as he was climbing out of a creekbank.  Soon thereafter, he used the snake as a worthy excuse to quit surveying and to devote all his time to his true love, the nursery and orchards.

In the 1960’s, he began to ship his boxwood to garden centers throughout Virginia and Maryland.  Early on, he recognized problems with the predominant variety ‘English’ boxwood and began a search for better cultivars.  Paul helped to establish 60 testing sites from New England to Chicago southward to Memphis and the Carolinas.  Colleges, universities, botanical gardens, arboreta, and individuals participated in an evaluation project whose goal was to introduce new varieties into the industry.

Throughout his life, Paul took Tatum with him when he traveled, and they worked as a team.  The business grew, and with the help of many devoted workers, Saunders Brothers, Inc. now grows and ships plants throughout the mid-Atlantic region and has supplied boxwood to the White House, Longwood Gardens, and other historic sites.

In the early 2000’s, Paul published a 600-page book Heartbeats of Nelson, in which he took great interest in meeting fellow Nelsonians and arranging Nelson County photos and stories from the American Civil War through Hurricane Camille.  He later published Down on the Farm and Memories of the Packing Shed, collections of stories and photos.  He was delighted to reflect on the people the farm had brought into his life.

Paul was a loyal Virginia Tech Class of ‘54 alumnus and held season tickets to the football games for over 50 years.  He loved to load up his family and friends and travel to Blacksburg on Saturday mornings.  All his sons along with 18 grandchildren are either graduates or are now enrolled at Virginia Tech.

An avid fisherman, Paul anticipated the opening day of trout fishing season every April.  He relished telling his thoughts on why the fish were or were not biting.  He had little patience for fishermen that didn’t sneak up on the fishing holes to avoid being seen by the native Brooks or fishermen who wore bright colors that spooked the fish.  Without apology, he often used only a cane pole.

In recent years on Saturday mornings, during fruit harvest at 11:00 sharp, Paul would ring a loud bell at the Saunders Brothers Farm Market.  He would then heartily lead anyone visiting the farm market in singing “God Bless America”.  Paul would give free ice cream to any U. S. Veterans in attendance, and then of course have some himself if Tatum was not around!

Paul was the younger brother of Rebecca Saunders Anderson Tucker and Samuel Edmund Saunders, Jr, both of whom predeceased him.  Paul and Tatum raised seven biological sons, Paul Massie, Jr. (Joyce), Thomas Newbill (Lyn), Julian Bennett (Lynn), James William (Amy), Robert Edmund (Pat), John Tatum (Ruth), and Samuel Ferguson (Alisha), along with 35 grandchildren and 14 great-grandchildren.  Two more young men became a part of the Saunders family and were treated as brothers, Frank Sirois and Ivan (Galina) Morozov.  Blood kinship was not a prerequisite to become a part of Paul and Tatum’s family.  They unconditionally loved people from all walks of life.

Arrangements are under the direction of Wells/Sheffield Funeral Chapel, Lovingston, VA (434-263-4097).

To order memorial trees or send flowers to the family in memory of Paul Massie Saunders, Sr., please visit our flower store.